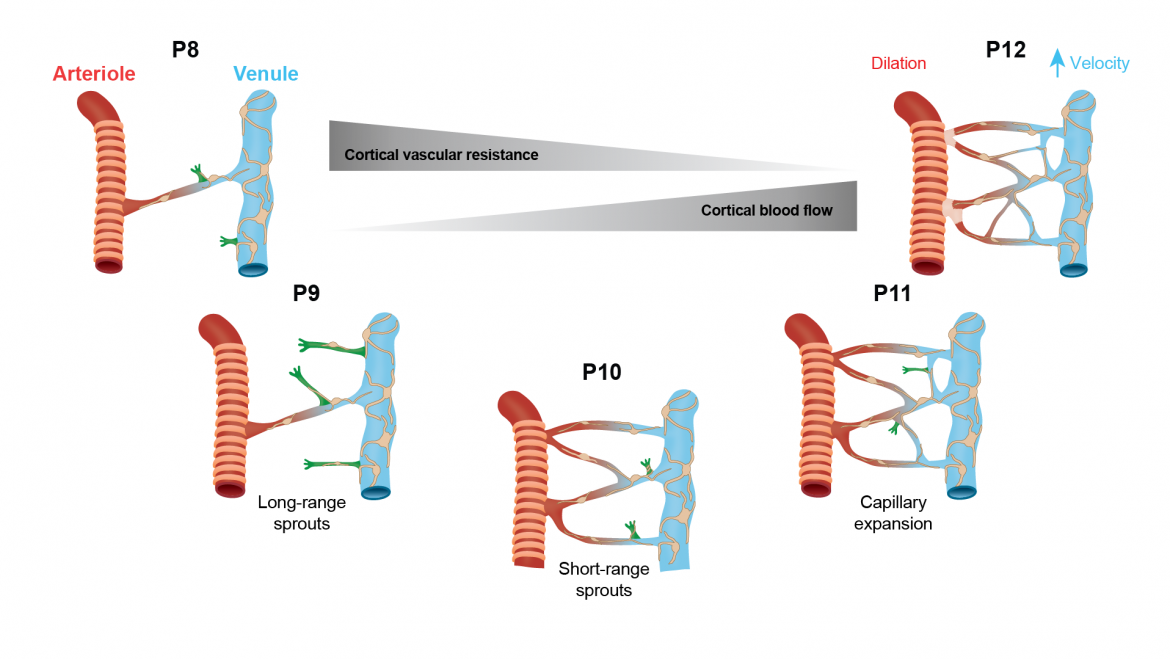 Congrats to Dr. Vanessa Coelho-Santos for winning an award for her poster at NAVBO this year!

Vanessa is fascinated by brain development. The first few weeks after birth involve significant changes in the neuronal circuitry of the cerebral cortex. There is extensive migration and wiring of neurons as the brain matures. The distinct layers of cortex are also being established during this time, which is a metabolically demanding process that requires constant blood flow. Surprisingly, the complex capillary networks that provide blood to the brain are not fully formed at birth and must be constructed alongside neuronal development. How complex vascular networks are built in vivo without disrupting the constancy of blood flow is a fascinating conundrum.

Consider the analogy of constructing a new house. Plumbing is laid out as the house is built, but water does not flow until all pipes are sealed and pressure appropriately balanced. This ensures that no leaks occur, and that water is delivered to all locations in the house. However, the brain does not have the luxury of turning off its blood supply temporarily. It must build and remodel a complex capillary network while maintaining flow at all times.

In her studies, Vanessa  has elucidated the mechanism for this remarkable feat. Using in vivo two-photon microscopy to observe the brain through thinned-skull windows, she showed that the core architecture of the cortical capillary network is established during a burst of angiogenic activity lasting just 2-3 postnatal days (P8-P10). A key insight obtained from this imaging was that cortical venules are the source of all new angiogenic sprouts. This allows fragile new sprouts to grow in a low pressure, low flow environment that minimizes the possibility of breaches in the vascular wall. These sprouts are “pre-fabricated” to be lumenized and covered by pericytes so that they can immediately support blood flow once connected nearby arterioles.

With this arrangement, there are no vascular “dead-ends” arising from arterioles that might lead to flow impedance or turbulence.  These collective changes support a robust increase in cerebral blood flow and explain how extensive vascular remodeling can occur without disrupting the constancy of blood supply during a critical period of brain development.